There are at least three good reasons to believe in the God of the Bible:

To illustrate a vital point, I’m going to paint an unusual scenario.

Imagine for a moment that there have been a ton of unexpected weather patterns lately, and they’ve been appearing at beaches around the world. 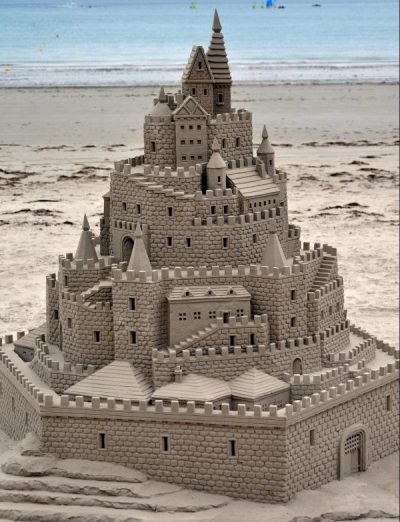 Powerful sand storms have been spotted at beaches around the globe: in Australia, and Brazil, and Spain, and California.

The sand storms will rage for hours.

At the end of the sand storm, every single time, after the wind dies down, and the sand stops flying everywhere, formations like these have been appearing due to the sand storms!

Is there anything I could do to convince you that a sand storm could produce that intricate sandcastle?

No way. You’d never believe it!

Of course you’re not going to believe these sandcastles were made by chance.

These sandcastles have obvious purpose and design.

They’re intricate, and even have logos you’re familiar with, and some have letters that spell things! 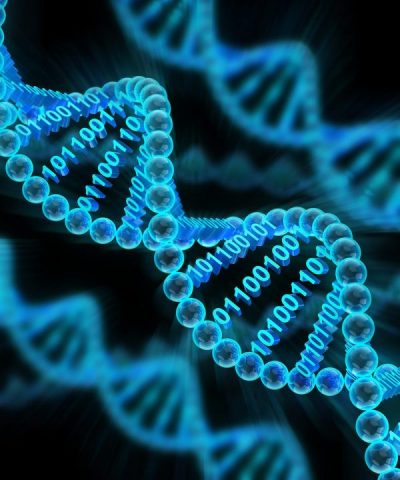 As impressive as these sand sculptures are, you and I are A LOT more impressive.

We have DNA in every cell, more complicated than the greatest supercomputer, telling the cell to be a heart cell, or a lung cell, or an eyelash cell.

We have eyes with photosensitive receptors so we can see these sandcastles.

We have brains to appreciate the sandcastles. And we have a complicated symbiotic digestive system to eat the junk food at the beach!

You know, with how amazing we’re made, compared to us, that sandcastle is literally just a pile of dirt.

We know we’re made by God because nothing is made by itself no matter how much time and chance you give it.

Everyone believes in God because God has made it clear to them through Creation.

The Word of God says it this way:

[Everyone knows] the truth about God because he has made it obvious to them. For ever since the world was created, people have seen the earth and sky. Through everything God made, they can clearly see his invisible qualities—his eternal power and divine nature. So they have no excuse for not knowing God (Romans 1:19-20).

The Creation screams to us that there is a Creator. The Creation itself bears witness to the fact that God exists. When we watch a baby being born, or when we study the stars, or when we consider the interaction between a bee and a flower, we must conclude that a great and powerful God created all of this. Every painting has a painter, and every building has a builder. Creation has a Creator.

The Bible sums this concept up this way:

The heavens proclaim the glory of God. The skies display his craftsmanship (Psalm 19:1).

In other words, the Creation itself demonstrates to us that there is a Creator.

Not only has God given us the Creation as evidence for His existence, but He has given us a conscience as well. Consider your conscience. It’s the part inside of us that tells us that we have done wrong. This can not be explained outside of a Theistic worldview.

Please take a moment to listen to your conscience.

The Bible calls that “sin” and that’s precisely why it is not enough to merely believe in a “higher power” or mentally assent to believing in some sort of “god.”

The Bible teaches that we must be Born Again. Sound harsh? Let’s examine the third reason, Jesus’ Resurrection.

Jesus’ historical resurrection from the dead is the “smoking gun” that cements the truth of Biblical Christianity.

If Jesus actually supernaturally rose from the dead, then we can know with absolute certainty that the following are true:

Not only does the resurrection positively prove those things, but the reverse is true as well. If Jesus has not actually historically risen from the dead, then Christianity is a sham.

The Bible says it this way:

And if Christ has not been raised, then your faith is useless and you are still guilty of your sins. In that case, all who have died believing in Christ are lost! And if our hope in Christ is only for this life, we are more to be pitied than anyone in the world (1 Corinthians 15:17-19).

Clearly Jesus’ Resurrection is not merely an important issue to consider, but THE MOST IMPORTANT issue. If Jesus raised, we must all Repent and Believe. If he didn’t, then those who do believe should be pitied.

The Resurrection has lead many skeptics and Atheists to come to faith. It is worth studying.

Many world-renown Scholars have written books and volumes and articles and essays on the Resurrection. I see no reason to reinvent the wheel when others have done such an exhaustive job.

Please feel free to read it in its entirety in the “Flip Book” below.

If the “flip book” doesn’t show up in your browser, then please feel free to download the article here: https://great-news.org/Evidence-For-The-Resurrection.pdf.

This video is long, but very thorough and convincing. Please watch it give it careful consideration.

And if you’d like a longer, more extensive work, please see Dr. Gary Habermas’ comprehensive work, The Case for the Resurrection of Jesus.

There is compelling evidence for God.

But knowing in your head about God is not enough. We must humbly turn to him. That’s repentance, and our pride is what keeps so many people from coming to Jesus for salvation, not lack of evidence.

God has made his existence clear to us through the creation and our conscience. Also the Resurrection.

[Everybody knows] the truth about God because he has made it obvious to them. For ever since the world was created, people have seen the earth and sky. Through everything God made, they can clearly see his invisible qualities—his eternal power and divine nature. So they have no excuse for not knowing God (Romans 1:19-20).

I speak to people about Jesus all the time. Often, after answering questions with evidence, I’ll ask them, “If I could answer every single objection you have to faith in Christ, and you knew that Jesus is who he says he is, would you worship him?”

And you know what, nearly 100% of the time, the person thinks about it and answers, “No, I wouldn’t worship him.”

And that’s the issue right there. It’s not lack of evidence, because God has kindly given us overwhelming evidence. It’s just that as humans we want to do what we want to do, and we don’t like the idea of anybody, even our Creator, telling us what to do.

The Bible says it this way:

Yes, [everybody knows] God, but they wouldn’t worship him as God or even give him thanks. And they began to think up foolish ideas of what God was like. As a result, their minds became dark and confused (Romans 1:21).

Please don’t let your pride keep you from the GREATEST GIFT ever. There’s plenty of evidence for Jesus. But pride stops us from turning to him.

Will you please turn away from your pride and turn to Jesus? Jesus said, “unless you are born again, you cannot see the Kingdom of God” (John 3:3). We are born with a disposition against God, and we need a new way of thinking. We need to be adopted into God’s family.

We become adopted into God’s family when we are Born Again. This is done through Repentance and Faith. That’s how one becomes a new creation in God’s eyes. And how God sees us is way more important than how anybody else does.

Please Repent and Believe today. You might not have tomorrow.

Please contact us if we can help you in any way! God bless you!

About Mark Sohmer, Missionary and Director of Great News Ministries

I'm a husband and a daddy of 4. I'm also a Jew who believes in Jesus. Do you think that's odd? Can I share my story? https://mystory.great-news.org.

Please send us an email, and we'll get back to you as soon as we can.

Type and press Enter to search